The purpose of this tourist initiative is not simply to tell the same refrain, promising incredible sensations, an unforgettable experience, a magic place where all your dreams come true... you'll hear this and that, over and over again. It might sound exciting but Disneyland is in Paris, Orlando, Los Angeles, Tokyo and Shangai...
After working many years in Paris, probably the most tourist place on the planet, I decided to distance myself from dream factories. As matter of a fact my intention is not making commercial promises rather letting the visitor discover and understand two very diverse territories so that your soul might get impregnated by the stillness and mystic beauty of Basilicata as well as the "joie de vivre" and lively culture of Puglia.
It will be you and your group, you and your family and nobodyelse (and me of course), in the end solely you. Being a private tour we can change and adapt the itinerary (when possible...) therefore neither just taking pictures nor listening the usual bla-bla, neither going after a chimeric dream ... rather enjoying yourself, ultimately enriching yourself with a valuable experience! 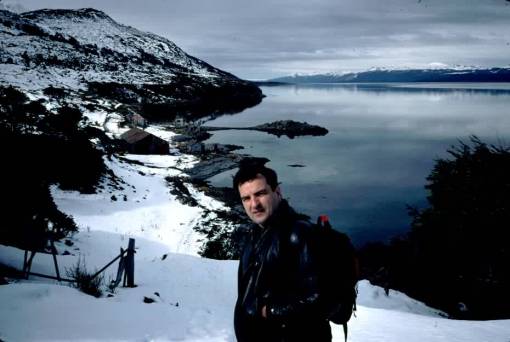 In my young years, I had a brief experience as researcher in Agronomy and Soil Science. As matter of a fact I also studied and worked for my Master's degree and Ph.D. at UCD (University of California Davis - U.S.A.). Nevertheless I left the academic world in 1990 and made my living as free-lance photographer between 1991 and 1996. I have a personal site and if you want to take a look at my photos, be my guest: Tymbaryon Village

In 1996 I landed in Paris and a completely new chapter began in my life and I happened to work as tourist guide. However I haven't been working in tourism always since then. I also worked in Argentina, Ireland, Brazil several years mainly as language teacher. This might explain why I am fluent in French, English, Spanish and Portuguese (and Italian of course). By-the-way my ultimate goal is to speak fluently Greek one day as I have Greek ancestry from paternal side and French (Occitan) from maternal one.

By-the-way, my name is Sim Andrulli (short for Simeone), I'll be delighted to show you my two beloved regions and share the passion I feel for my land. You are welcome to contact me and inquiry about the proposed destinations. Bye for now!

Matera is Puglia or Basilicata?

Matera is in a particular geographical situation. Located on the edge of the Murgia plateau, as much as most of Apulian cities bordering the Murgia and leaning on the Ionian Sea, Matera is characterized by a canyon locally called "gravina". Its municipal territory, like Gravina in Puglia and Ginosa, has hybrid characteristics with one part lying over the Murgian plateau and the other over the Bradanica Foredeep.
This does not explain the reason why Puglia and not Basilicata took advantage of the recent fame achieved by the "City of Sassi". What happened then?

Basilicata has two provinces, Matera and Potenza, and the latter since it became the regional capital in 1807 has always tried to overshadow the cumbersome presence of Matera. Matera, nonetheless until 1663 was part of Puglia. Due to historical reasons, the administrative center of the small region of Basilicata was Salerno, outside Basilicata. Then in an attempt to reorganise the vice-kingdom of Naples and not finding a urban center among the Lucanian towns that could meet their requirements, the Spaniards detached Matera from Puglia and made it its capital. Later on, during the Napoleonic administration, in 1807 in a new reorganization of the territory of the Kingdom of Naples, the regional capital was transferred from Matera to Potenza due to the eccentric position of the former in the Lucanian territory. Since then the rivalry between the two cities has never stopped.
The day after the proclamation of Matera, the capital of European culture 2019, the ancient rivalry between Matera and Potenza exploded. The regional leaders of Potenza, instead of promoting Matera, tried to drain as much media attention as possible over their own town and diverted most of the funds for the European Cultural Capital event to the rest of the region and above all to Potenza, trying ridiculously to rival the city of "Sassi" by presenting Potenza as a place of tourist vocation which it never was. As matter of a fact its historic center was wiped out in the frenetic modernization process of the 50s and 60s. Consequently Potenza ended up favoring Puglia.

Matera and the railway

Practically since the unification of Italy, the debate on the connection of Matera to the State Railways network (recently converted into TrenItalia) has never ended. Unfortunately, the tunnel that must connect the water catchment areas of Bradano and Basento rivers presents technical problems difficult to be solved. Therefore for the time being to reach Matera, the Appulo-Lucane railway still fulfills the task of taking travelers by train to and from Matera and Bari

Puglia and Basilicata have little in common. Puglia is predominantly flat, is characterized by a very long coastline with two peninsulas, has many populous centers over 50,000 inhabitants, very few rivers, a very developed underground hydrography due to the karst nature of its territory, has always had seafaring and commercial vocation consequently an extroverted character.
Basilicata, on the other hand, is mainly mountainous, has two short stretches of coast,it is rich in forests and rivers, few towns exceed 5000 inhabitants, population is aging and declining, people has the tendency to be introverted even though generous and kind.

Then Matera is Puglia or Basilicata? It does not matters!
For the purpose of those who will visit it, the position straddling the two regions makes Matera a privileged starting point to explore these two different, beautiful and charming regions of Italy
You are definively welcome!

Matera is the starting points for the tours. The proposed tours can be modified within the limits of the logistical possibilities